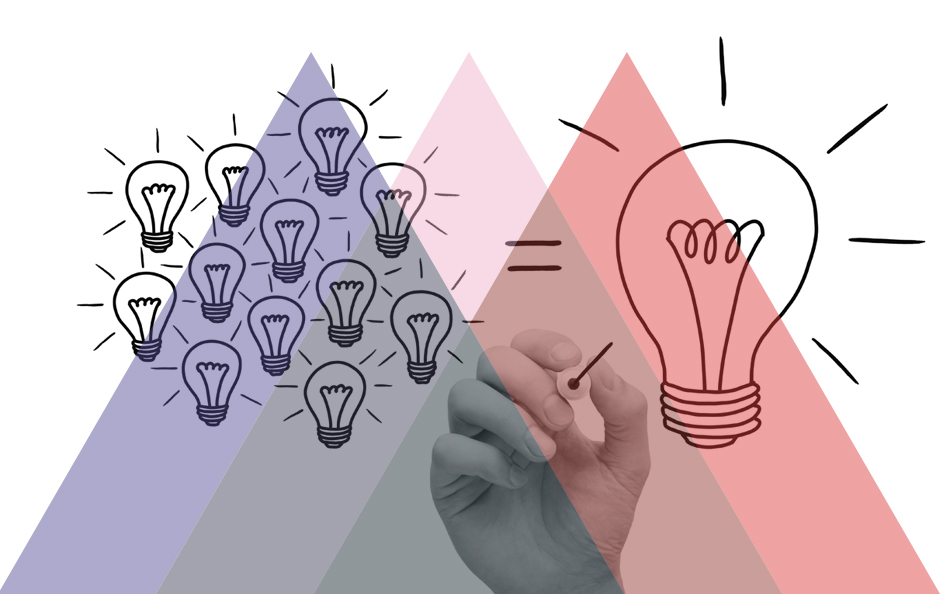 Carl Jung on intuition and creativity

For Carl Jung, the founder of analytical psychology, to develop intuition and creativity is first of all necessary to grasp what is synchronicity. In the paper « Synchronicity – an acausal connecting principle » published in 1952, Jung, defined synchronicity as :

The coming together of inner and outer events in a way that cannot be explained by cause and effect and that is meaningful to the observer.

We’ve all experienced coincidences in our lives. However, at times there are coincidences that are so perfectly tailored to a detail and so improbable in terms of timing that you can’t dismiss it. The word itself is made from two Greek terms : «joined with » and « time ».

Whereas intuition is an ability or feeling that makes it possible to know something without any proof (internal), synchronicity happens out there.

Let’s illustrate the difference : Having a sudden desire to phone a friend who you haven’t talked with in a while could be intuition ; synchronicity would be feeling a sudden desire to talk with this friend and before you even have a chance to tap their number into your phone, they suddenly call you. In this case there is an internal voice that sets you to something and synchronicity provides you with what you need.

So when does this kind of synchronicity, which could be called intuition being answered by an external event, happen ?

An example concerns a young woman patient who proved to be psychologically inaccessible. The difficulty lay in the fact that she always knew better about everything. Her excellent education had provided her with a weapon ideally suited to this purpose, namely a highly polished Cartesian rationalism with an impeccably geometrical idea of reality. After many attempts to awaken her rationalism with a more human understanding, I had to confine myself to the hope that something unexpected and irrational would turn up, something that would burst the intellectual retort into which she had sealed herself. Well, I was sitting opposite her one day with my back to the window, listening to her flow of rhetoric. She’d had an impressive dream the night before in which someone had given her a golden scarab – a costly piece of jewellery. While she was telling me this dream I heard something behind me gently tapping on the window. I tuned around and saw that it was a fairly large flying insect that was knocking against the window pane from outside in the effort to get into the dark room. This seemed to me very strange. I opened the window immediately and caught the insect in the air as it flew in. It was a scarabaeid beetle whose gold green colour resembles that of a golden scarab. I handed the beetle to my patient with the words « there is your scarab ». This experience punctuated the desired hole in her rationalism and broke the ice of her intellectual resistance.

When it comes to deciphering the synchronicity in the above example, what is complex is identifying whether the internal need that provoked the synchronicity is the woman’s need to let go of her intellectualism or is it Jung’s desire to pierce a hole in her cartesian logic ? Or could the ensuing synchronicity that occurs (the beetle appearing at the window) spring from the shared needs of both Jung and the woman who are in sync with each other ?

There are three different patterns in which synchronicity happens

Single synchronicities include the example of someone thinking of their friend and then the person in question calling them, or being in the right place at the right time. Another example is the one Steve Jobs cited in his Stanford University commencement speech, « How to live before you die », when he accidentally dropped in on a calligraphy course, that later on served him so well in designing the typography for the first Macintosh computer. In this example, we can see the process : how a deep inner need emerging (Jobs wanting to explore his creativity) is followed by an outer event that comes about (finding the calliography course by accident) that has meaning (helps him develop his creativity). The intuition which led Jobs to travel to India in 1974 to study Buddhism was also a strong turning point in his life; he often said that it was learning to meditate and have faith in his path that gave him the resources he needed for innovation.

What is for sure is that synchronicity doesn’t occur when there is confusion or uncertainty in your feelings and needs. If Steve Jobs had been telling himself : «Well, I’m not sure whether I should be doing something creative or finding a job in a bank… », he would not have been as prepared to drop everything to do his calligraphy course or travel to India to study Buddhism. So synchronicity only comes about if there is strong intuition.

At times, synchronicities can happen one after the other. An example is always seeeing the same number or hearing the same phrase. What is interesting in strings of synchronicities is that they resonate and have a specific meaning in their totality.

I have an example which comes from my own personal experience of trying to find a name for my coaching company. I’d decided to use my initials but wanted to add an extra letter (HP being Hewlett Packard or HP sauce in the UK). I was at a loss with finding the third intital, having already tried « A» (HPA was already taken), and « C » (HPC stood for High-performance computing). Then a few weeks later whilst at an art exhibition entitled Keys to a Passion in Paris, I came across a painting by Piet Mondrian, that struck my attention. I’d always loved Mondrian, the dynamic balance of his compositions with vertical and horizontal elements, and this picture in particular piqued my interest as it had forms of « H’s » in it and I’d been looking for an original-looking « H » to use in my logo. I noted down the name of the painting in my notebook (this stage could be called having an intuition).

Later on that day, I decided to research Mondrian and in the first article I came across on the internet, I learnt that Mondrian was a fan of « HPB » who was actually a woman called Helena Petrovna Blavatsky (who never used her name, just her initials) and who had written books on fraternity and the importance of diversity that inspired Mondrian’s art. By following my intuition, an outer event had put me on the right path. I’d found the last initial for my company. A few days later as I was listening to an interview of John Maeda speaking about how art and design inform creative leaders, I heard his words :

Innovation comes from a Human Place in Business.

So a string of synchronicities (or following and exploring intution) had led me to the last intital I needed and guided me to find the higher purpose or sense for my company.

The lesson I take from this is the importance of being open to inspiration from different sources and to the idea that you might find answers in places and from people you would never have imagined, and exploring intuitions.

Finally there are cluster synchronicities

In cluster synchronicities, that seem to be more rare, the pattern of synchronicity is richer, far more complex and on different levels (cluster synchronicities can involve people, coincidences with dates, meetings and meaningful events). Basically this is not just a one-off synchronicity or a string of them that are in sequence (like me finding the name to my company). To deal with the complexity that cluster synchroncities present, being open and receptive to the different messages and significations of these synchroncities would seem to be the key. At times of baffling complexity like this, trusting yourself is also essential. I turn again to Steve Jobs as he always emphasised the overriding role of intuition and synchronicity in his life.

According to him, following his intuitions and stepping into the realm of synchronicity not only led him to greater creativity but also stengthened his belief and faith in his path. He said that even if at times you can’t see what path you’re going down, in time it will make sense as long as you have faith (this can be faith in God, karma, destiny, yourself or your talent but there has to be faith in something, so finding the source of your self-belief is important).

You can’t connect the dots looking forward ; you can only connect them looking backwards. So you have to trust that the dots will somehow connect in your future.

What Jobs is saying here is akin to a passage from a collection of interviews called « An open Life » with the late Joseph Campbell :

There’s a wonderful paper by Schopenhauer, called ‘An Apparent Intention of the Fate of the Individual,’ in which he points out that when you are at a certain age…and look back over your life, it seems to be almost as orderly as a composed novel. And just as in Dickens’ novels, little accidental meetings and so forth turn out to be main features in the plot, so in your life. And what seem to have been mistakes at the time, turn out to be directive crises. And then he asks : ‘Who wrote this novel?’
Life seems as though it were planned…Schopenhauer finally asks the question: Can anything happen to you for which you’re not ready? I look back now on certain things that at the time seemed to me to be real disasters, but the results turned out to be the structuring of a really great aspect of my life and career. So what can you say?

What I would say to this is if we expereince the world in which we live as being holistically and intricately connected, feel we are part of what is around us and engage with it in an open, receptive and nonjudgemental way, we become more intuitive and creative.